It all started driving home from school one day when I saw a sign from ‘above’! Kidding, it was actually at the end of someone’s driveway in Mt. Stewart that said “FREE PALITS!” I assumed this meant pallets so I ventured up the driveway to find a sea of old ones. A few hard knocks on the front door and Frank appeared. After a quick chat with the shirtless gentleman, he gave me the go ahead to take what I wanted, after he asked where I was from and if I was related to George MacDonald.

So I jammed in as many pallets as I could and headed home. They were in pretty rough shape but there were a few good boards in the mix so I ripped them apart. After a few cuts on the table-saw to square them up, a little glue, a few clamps and a lot of sanding, they started to take shape. I’ve made this Island already so I just traced the one I had onto the boards. I don’t have a bandsaw at home so I use my schools or dads. It is a little inconvenient spending my lunch hours in the shop or running over to my parents to use my dad’s. But during last Sunday’s dinner I was telling/showing Juddy Judson Sr. about my projects and how I didn’t have a bandsaw. He suggested I use a skillsaw and that he just happened to have one. A half hour later I was in his shop and had a ‘long term loan’ of his (he said the same for the belt sander). This tool made my cuts a lot smoother, easier and faster. I did end up breaking several blades at the start before I learned how to use it correctly. I think they turned out pretty cool with the rustic looking wood. I hope my FIRST customer, Roberta D., likes them! 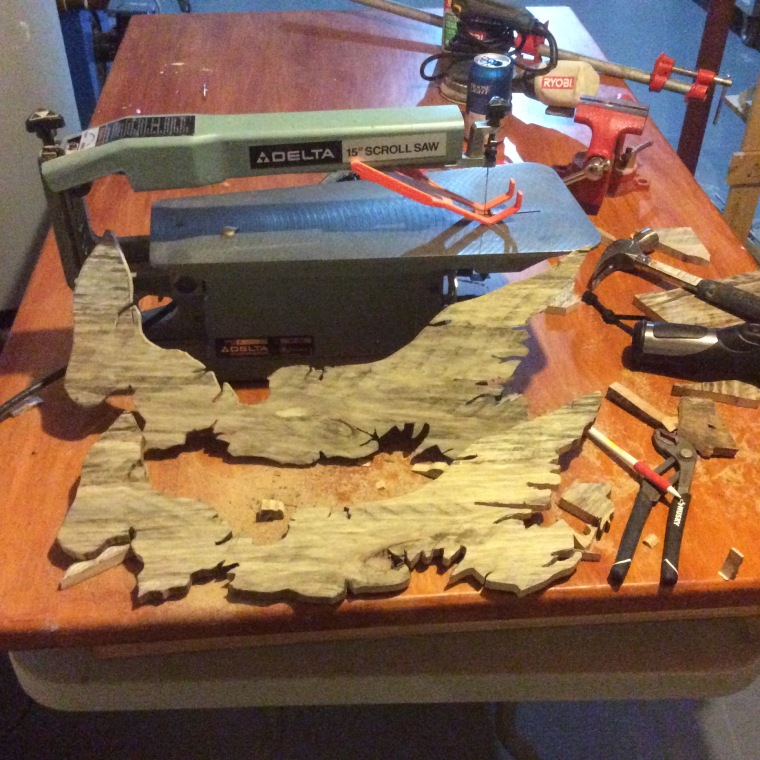