Well my plan was to be almost finished of my kayak right about now! I’ve yet to start it mostly because the shop has been busy as balls. I’ve crushed out 3 wedding arbors. They turned out pretty great (if you’re asking me). I definitely have the production of that down pretty smooth. I still have to build one more but I’m taking a quick break and will likely get back to that this weekend. In between the arbors, I’ve built a gigantic shark. You can find that in Cavendish at PEI Dirt Shirt. I also built a bunch of wooden toy cars dyed in PEI dirt. They are at the PEI Dirt Shirt at Peaks Quay and I’ve been building a few things around the house. At times I have too many things on the go. The town of Stratford said it best, “Imagine that”!

I just finished a pretty cool bench for our front step (pic below). I was going to do a build process of that but I dropped my phone in the sump pump, which was full of water, unfortunately. Phones are slippy. I shouldn’t own one.

So, with the expected birth of our daughter within the next few days, I decided to build a toy chest for her dolls, Ninja Turtles, G.I Joe’s or Barbies. I’ll be quite happy to fill it with whatever she loves. I built the majority of the chest from old kitchen cupboards my in-laws were tossing to the curb. There were a shit-ton of nails in them but still cheaper than buying a sheet of plywood (I really love free wood).

I think this turned out amazing!! There are a few mistakes but I’m definitely seeing an improvement in my work. My wife and I upholstered the lid, which turned out adorable! One of my favorite things I’ve built, no question. On a side note, I appreciate all the great feedback I’ve been getting from everyone. A special thanks to those who trust me to build them stuff.  I recently just turned 16 again and got a bunch of new tools for my birthday. Super pumped about that!!!! Can’t wait till Santa drops off that 20 by 20 cedar workshop. With surround sound and a 60 inch TV. A urinal would be great, too!

Check out the build process below and a few other builds 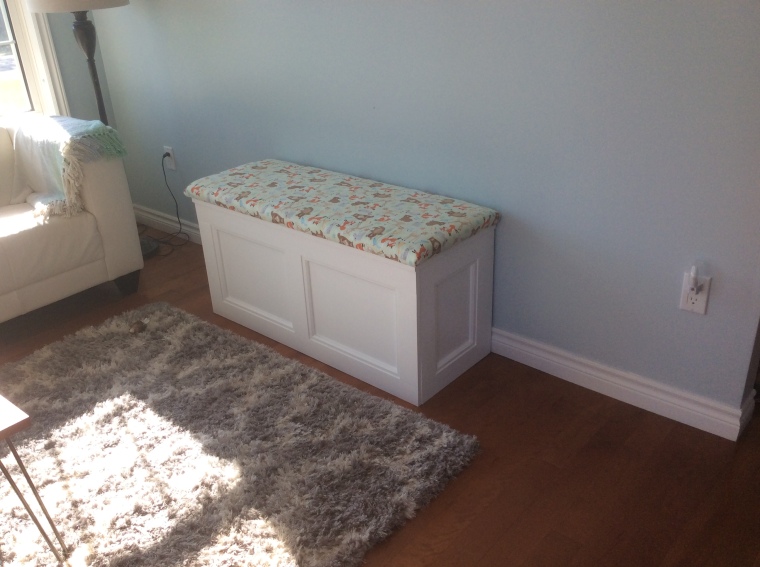