Hey everyone. Get ready for a big one!! The shop is finished and I am proud of it! I can’t count how many hours it took me to build or how many beers I drank (probably close to the same lol). It took me almost three months of hard work and it was worth every second of it! Sure, there were times where I didn’t want to work, but if I didn’t get out and just put my head down and work, I’d never finish. So that’s what I did. I worked hard and learned so many new skills that I already forget half of them.

I  went into this with zero building knowledge/experience, but I’m pretty happy with how it turned out. Sure, there were some hiccups and ‘contractor’ errors, but when you YouTube how to do something the night before you start it, you can’t complain too much. There were lots of things I was nervous about doing because I didn’t feel comfortable/I didn’t want to screw it up, but I had no other choice. I took my time and I surprised myself several times.

I don’t want to bore you with the  building process (besides pictures), but I do want to give a quick thanks to a few people who’ve helped me out during the build. I had lots of help throughout this build and I am so grateful for awesome friends and a great family! In no particular order we have;

Bob Judson – My dad. Man, I can’t begin to thank him enough. From the roof to the rafters, the electrical and everything in between, he certainly has helped me out a lot during this build I would have finished the shop in 2020 if it wasn’t for his help. He even worked on it alone at times while I was working! I owe him my life (literally).

Patrick Dwyer- He’s been around for the entire process and helped me with a great deal; from the roof and the forms for the concrete (which lifted up and concrete started pouring out. I literally nearly shit my pants and threw up at the same time. Luckily, we were able to stop the leak and the concrete pad settled) to the siding and the drywall, he’s been a great help to have around!

Colin ‘Gator’ Livingstone- He has drunk more beers during this build than I have, which is pretty impressive! (I’m only kidding, Megan 😉 (his wife)). He has been a great help throughout the whole process. Even if I just need a hand for 5 minutes, he is there to help!! He and his wife just welcomed a beautiful baby girl into this world, too! Congratulations to you both!! She’s a lucky girl!

Rob Salter- What a great dude. I haven’t seen the guy in 14 years, yet he has been over several times and helped me install a few windows! Real good guy.

Richard Swan- Richard is a contractor. I had messaged him one evening with a concern I was having. I felt like I could push the entire building over. The roof wasn’t on yet but it felt like the building was made out of Popsicle sticks rather than 2 x 4s. Richard was over in 5 minutes and told me what to do. His expertise immediately turned the building into a rock solid, secure fortress that any mediocre woodworker would be thrilled to call his shop!

Jan- He is my neighbour and another real nice fella. On one particular windy day, I was trying to put the house wrap on the building. If you know what house wrap is, it is extremely difficult to put on by yourself, let alone on a windy day! I’d get half way down the building and the wind would rip it all off.  I was losing my facking shit during this part… real bad. I’m frustrated even thinking about this experience.  I was cursing words I didn’t even know existed. Jan peaked his head around the corner of the building and asked if I needed help due to the profound language that woke his napping wife. I gladly accepted and we tackled the house wrap together.

Ryan Killer Kowalski- Ryan is a skilled red-seal mason and he did some patch work on the concrete slab for me! He also started his own masonry company, so if you are looking to have something repaired or have that new fireplace mantle put in, he is your guy!! Top notch quality is his middle name! I encourage you all to give him a call if you are in need. Spread the word of this fine brick and stone specialist!!!  Check out his website http://www.keystonemasonrypei.com/

Dave Canvan – Dave comes in at 9 feet tall so he was a great guy to have around holding up the OSB while I nailed it to the studs! Great fella, too.  He even brought his own hammer which looked like it belonged to a 4 year old child.

Jonny Locke- Jonny has been a great help! He got me a great deal on the roof and came over several times to lend a hand with the roof and strapping and walls (I think? It all blends in). He’s another good dude!

I had several guys over to help me hang the drywall. I can’t believe I didn’t get any pictures of this, but these guys worked their holes off. Everyone was learning something new and it was an awesome night!  I really appreciated their help. I just wish I had some head shots for the blog. Maybe I’ll order some T-shirts for the crew. The team consisted of Zach Currie, Ryan Keliher, Brad Larter, Ryan Kowalski, Cai Wadden, Pat Dwyer and Mike Ellsworth!!

Okay. Lets get into the pictures and the build process! 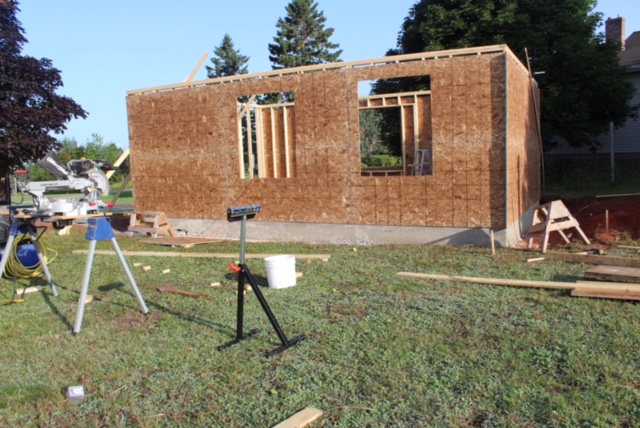 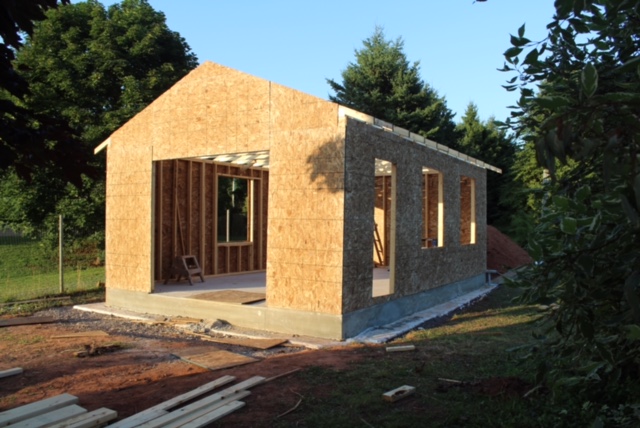 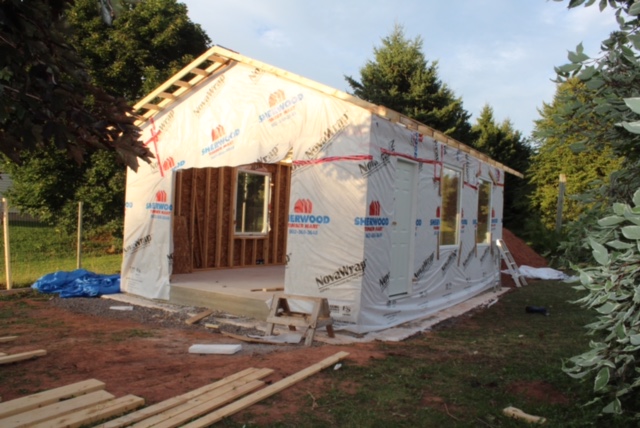 Okay. There you have it!! The shop is finished!!!!! I still have to get some cabinets and have some organizing to do but it’s FINISHED!! I couldn’t be happier/more excited to be done! Three months of hard work was totally worth it! Isn’t everything always better when you have to work hard for it!?! Ask my wife ;)… That’s a joke. She had me instantaneously.

Well, I want to thank everyone who has been supporting me. I certainly wouldn’t be able to do all of this if it weren’t for you! I’d still be down in the basement, sweating my balls off and burning myself on hot pipes.  So thank you to those of you who asked me to build them things over the last year!!

I’d like to give a very special shout out to my wife, as always, for supporting me through this!! She had to hold down the fort while I was out there working, not to mention sacrifice our QT. Can you imagine how she felt, not hearing my inappropriate jokes as often… poor girl. But really, I’m pretty frigging lucky to have her! Also, I want to thank my Mom and Mother-in-law for taking care of our little girl while Courtney and I both transition back to work. We are pretty lucky to have you, too!

Oh,  if you’re wondering if I went over my budget……. I did, but surprising not by a lot!! But please, keep sending me orders so I can stay married.

That’s a wrap! Thanks again.

Keep your chisels sharp or lost. I can never find mine.